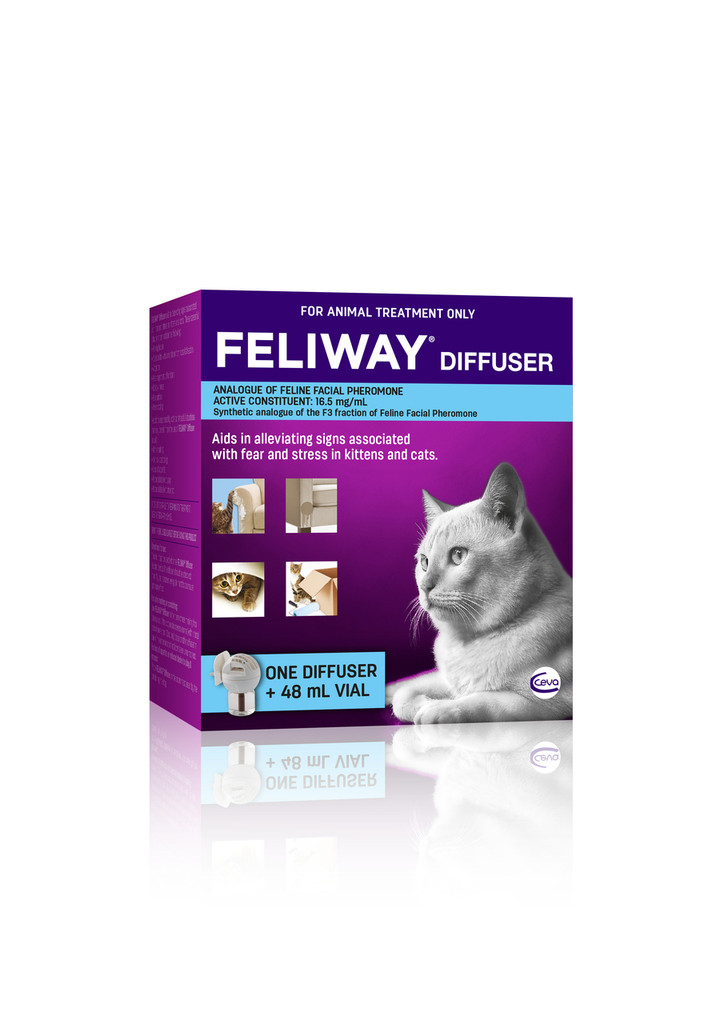 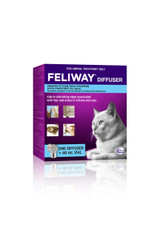 Feliway is a synthetic copy of the feline facial pheromone, used by cats to mark their territory as safe and secure. By mimicking the cat’s natural facial pheromones, Feliway creates a state of familiarity and security in the cat's local environment. As a result, Feliway can be used to help comfort and reassure cats, while they cope with a challenging situation and/or help prevent or reduce the stress caused to a cat during a change in their environment.

Feliway Diffuser aids in alleviating signs associated with fear and stress in kittens and cats. These stressful situations can include:-

I bought this diffuser to replace the one we had because of concerns that the older diffusers might be a fire hazard and because I had noticed the old one got very hot in use. We use when we take our cat to our son's house; a nearly 4 hour drive and a different location. The product has always helped our cat but the new diffuser also made a big difference; the active is diffused more gradually and our cat was definitely a lot less stressed.

Our cat had been extremely stressed since our daughter moved in with her huge dog- over 12 months. She hid away and whined all day. Within two hours of plugging the diffuser in she was sitting with us having a cuddle. We can’t believe how effective give it was.

Works well for my cat

I like the diffuser, compared to the spray, as it’s constantly working and you don’t have to reapply it every couple of days. Will be purchasing another one to place in the bedroom as well.

I cannot be anymore Happier with this product. My lovely 10 year old cat Minni has been suffering separation anxiety and had severely licked her back legs, tail and hips to the point of almost no fur being present. I've had this diffuser for less than 2 weeks now and her fur is already growing back, she's a lot calmer and happier. After trying everything and not wanting to resort to medication this has done what it states. Definitely recommend!

I would highly recommend the diffuser. It has made a big difference to my highly anxious Charlie. I saw results in a couple of days and had kept improving. He still gets anxious but i would say it's been 3 weeks now. He would be 70% better. I have another months worth and then I'll see how he goes. Very impressed and surprised. Thank you

Ultimately, my Draco has calmed down slightly. He still scratches doors but he has made an improvement in his stress levels. Will buy again.

Very happy with the Feliway Diffusor set..My cat had a scare and this helped him a lot

I purchased this from this website primarily becuae of the price difference - $50 cheaper than a bricks and mortar pet store (and no doubt a lot cheaper than the vets) I have been coming home to a very anxious female cat, mostly because my male cat attacks her on a daily basis. Being indoor cats, there is nowhere for her to escape. She was even too stressed to be picked up or be in the same room as him. I purchased feliway to help reduce her stress levels and to help with his dominating behaviour. I received this 3 days ago and I can already see a huge improvement. My girl is so much calmer, they do still have slight disagreements but they don’t chase each other around agressively. She will even sit near him, though she occasionally grumbles at him. I wish I had bought this earlier!

One of my cats was constantly attacking my other 2. I was desperate so thought I’d try these - I was skeptical - but from the moment I plugged them in she’s been a different cat. Calm, relaxed and now she just lays back and watches the other cats go about their business instead of attacking them for breathing!

My four year old ginger has territorial issues and separation anxiety, and the Feliway diffuser has been a blessing!

My cat had a habit of peeing on the bed. Since getting the Feliway diffuser, there’s been no more accidents and she’s been noticeably more cuddly. Very helpful!

We got this for our 11 year old cat who was still extremely stressed and hiding after we sadly rehomed our other cat who attacked her the moment she saw her. Within minutes of plugging the diffuser in, she came from under the bed. She is now freely roaming the house again and back to her affectionate cuddly self. I wish I had tried this before rehoming our other cat to see if it had made a difference to her attacking her.

Excellent product, has certainly made a different ti my streesed out cat, as we have moved house. Also alot cheap for these guys than the vet.

Feliway has helped me keep my cats & keep my sanity

l have been using Feliway plug ins for several years now after my cats suddenly became hostile with each other. l find my 2 cats are calmer and get along much better. I have one plugged in downstair and one upstairs. One of my cats even goes up to it and gives it a good sniff every now and then. I also use the spray around the crate and home pre and post vet visits and they seem less anxious.

I've just moved interstate with 4 cats and Feliway is great for helping cats settle into a new environment. It was also a fantastic help a year ago when introducing multiple cats to multiple cats (I had two and my parents died, leaving behind 3). Thoroughly recommend if your cats are going through anything stressful.

Had a male ragdoll who was desexed as a kitten but he would still pee and poop inside on the floor even though he was toilet trained. Nothing worked until we bought feliway. It was pretty much instant :) not only did he stop going on the floor, he stopped using his litter tray and would go outside which i preferred.

Our cat is very nervous and hides if any visitors come. since using this diffuser he is a lot calmer, does not hide unless some one tries to stroke him

Our cat is very nervous, when anyone come to visit he hides in the wardrobe. No one has ever hurt him or abused him, he just is not used to others. after purchasing the diffuser he is a lot calmer and will tolerate visitors as long as they don't try and stroke him. he does not hide.

This stuff really works! I have it on constantly & it keeps my cats happy & calm.

i have been using this product from a week i couldnt beleive my cat stopped urine marking.I AM SO HAPPY.I will reccomend this product to everyone

One of my cats is a bit of a stress head, causing him to have urinary problems. Since having the Feliway diffuser, he has been very relaxed and content and I hope this will improve his health problems.

This is a wonderful product... i have 2 cats that were a little stressy at times and 1 that was urinating on the furniture and in a matter of hours the cat we have owned for a year was seen for the FIRST time ever...... and loving on them.. i recommend this 100%

Cat back from brink

Cat was on last legs, looking at walls, not eating, held up a sign saying"Death where is thy sting" After two days on this product, has zip in its step, beats up our other cat, has gained weight, eats like horse, stays out till all hours and for 14 year old acts 12 months.

I've only had this product for a very short time but from the 2 storms we have experienced since this purchase, my 15 year old cat seems so be a little more settled.

Pheromone therapy works. We still have to help our two cats adjust to each other in our newly blended household, but the diffuser (together with the calming collar) is a huge help. I'm using multiple diffusers as the rooms are open spaces and quite large. One diffuser works well in a regular room (with the door closed) if you want to calm a stressed cat, but I have found it more effective to use multiple diffusers in key locations when the cats are roaming freely and doors are left open.

When I first adopted my cat, he was in a household of 3 other cats and four rabbits. We were movin gout on our own and I was concerned he would be stressed, upset and lonely. I was recommended to try Feliway to smooth the process over and it has worked a treat. My cat loves it and rubs himself up against the diffuser. I highly recommend.